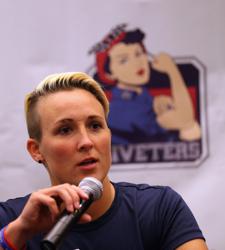 The New Jersey Rockets Organization is proud to announce the return of Madison Packer to our program. Madison served as the head coach last season to the 16u team, while also playing in the National Women’s Hockey League for the New York Riveters.

In her new role, Packer will serve as both u16 and u19 head coach, as well as the General Manager of the entire girl’s program. Packer will construct both on and off ice programs for all teams from u8-u19, as well as design practices focused skills and development for kids of all ages. She will also oversee the summer curriculum and training program that will be available to girls following tryouts.

Packer won two gold medals with the u-18 US National Team before earning a full scholarship to the University of Wisconsin where she competed for four years. Competing in three Frozen Four championships, Packer has won one NCAA National title, one WCHA Championship, and two WCHA league championships. She was two-time rookie of the week her during her freshman campaign, and earned WCHA All-Academic Team honors as a senior in 2014. Packer was voted an alternate captain her senior season and she is one of 21 Badgers to record more than 100 points in their career. Packer also served as the voice of the Badgers for their radio broadcasts during the 2014/15 season after she exhausted her eligibility.

After her collegiate career, Packer played two seasons in the National Women’s Hockey League. She served as an alternate captain both seasons, and was elected to the All-Star Game both years. She announced her retirement as a player in March 2017, and has moved the decisions to join the Rockets full time.

“Hockey is a game that has given me so much more than I ever imagined,” Packer said. “I fell in love with it as a little kid, and had a lot of great people who helped me along the way. I am excited now for the opportunity to be one of those people for players in the next generation. My passion for coaching is the kids. I love the game, I love being out on the ice, but most importantly, I love making an impact on young players, and helping them reach their goals.”

Packer is a Michigan native, and aside from playing hockey, is devoted to growing the game and attends events speaking about the future of women’s hockey. She is a leader in her community on speaking out against bullying and raising awareness about mental health. Aside from sports, she enjoys spending time with her puppies, Tigs and Zoey, and hanging out with her family at their cabin in Northern Michigan.